‘Temp Man’s’ soundtrack borrows from youtube tutorials that give guidelines on how to design a 3D head, re-read in the artist’s own voice and assembled with sounds of slicing knives. Through adopting, deconstructing and reflecting upon the dying language of digital video technology, such as the ‘final cut’ or the ‘blue screen’, while speaking about the emerging technology of 3D printing and film, ‘Temp Man’ becomes an allegory of the temporality of the very nature of technology itself. A small Flemish porcelain ornament representing an unidentified 18th century nobleman, and his chopped-of head, become part of the mise-en-scène. 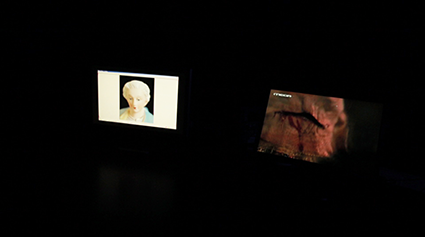